Last week I finally upgraded my mobile computing unit. I am retiring my Lenovo T410, accepting it as the lemon that I put up with for 6 years.

With significant thought I settled on the Microsoft Surface Pro 4 for my upgrade. Since school I have dreamed of a computer with a pen that is good enough to take handwritten notes. Unfortunately all the computer-tablets that existed when I was in class were clunky and the pen input was never fast enough or accurate enough to truly take hand written notes. The claims of massive improvement on input with a pen is what has draw me towards the surface line.

I have been enjoying my surface immensely. It is by no means a perfect machine, as windows 10 still struggles a little in high DPI tablet form, but its almost exactly what I wanted 6 years ago.

Just testing around a in a notebook with graph paper I started sketching the items on my desk and got the idea that I could raise my monitor a couple inches closer to eye level and remove the speaker amp from the rest of the clutter. So as I often do I started sketching designs for a little stand that would accompany the amp and provide a little storage. One I had a design I liked  I modeled is in SketchUp and printed it out on the 3D Printer. 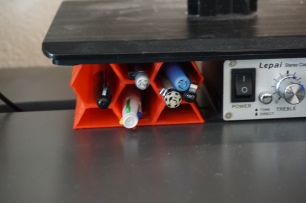 By the morning after having the idea I had created and installed the monitor stand. It had gone trough a few iteration of design on ‘paper’ already moving form squares to hexagons. For a project taking a few hours its, so far, been working wonderfully.

One thought on “Computer Aided Design”