Its been all over the news, Niantic has released a new game! Niantic of course is the small game studio that broke out the Google Maps team to build their popular geolocation game Ingress. I doubt many but a persistent few still play Ingress and even fewer probably know it ever existed, but now the company has skinned the game with Nintendo intellectual properties and it is bigger than twitter.

All the geolocation data that had been submitted by Ingress players over the years is now being put to use to make Pokestops and Gyms for Pokemon GO, the new geolocation Pokemon collection game. I will say I was resistant to try it initially; citing battery problems and privacy concerns, but now I’m hooked. Its been two weeks and now my Pokedex is more than half full.

Pokemon GO, is a simple game where players walk around the real world with the game open and the players geolocation data is sent to cloud severs and the servers respond with what is nearby, be it pokestops, gyms or pokemon. The players can than interact with these game elements by selecting them on their map. If a pokemon is nearby the player flicks pokeballs at the monster until it is captured. Pokestops are used to gather more resources and gyms are were one can battle other players to represent one of the three teams. There are a few more intricacies than that but that is the basics of the game.

This game is not new, novel or even well written. Frankly the only reason it got so popular is because of the Pokemon generation finally getting to fulfill there dream of being the best Pokemon trainer there ever was. I have never played any of the previous Pokemon games, and barely watched the shows or collected the cards as a child so I am not on board for the nostalgia train.

The second thing that has made GO the super success it is also makes it the envy of Twitter and Facebook and most social networking sites. Pokemon GO has social ground swell, the likes of which a social network could only dream of. To put this in perspective, I have a Facebook page: I do not want to have a Facebook page, I disagree with Facebook on privacy, technical and other issues, but I keep my page active and up to date. I do this because I can’t go anywhere else, everyone I know is already on Facebook, my parents my relatives, friends and coworkers. Facebook is the social network not because its better than others, but because it has the users to draw in an keep other users.

Once everyone who played Pokemon as a child installed and started playing the game this was enough people seeded into to thousands of social circles to encourage people who don’t know Pidgey from a Pigeot to try the game. This is of course can lead to exponential growth as the new people introduce more people, it gets popular enough to hit the news and now everyone is playing.

There are a lot of reasons to like the game. Its light and still interactive, making it a good game you can pick up for two minutes when you have downtime. The game is being heralded as the start of augmented reality (AR) games, though the AR is really just a novelty that any serious player will disable. The game use real world locations and landmarks and can teach one to find and appreciate things that one would have normally overlooked. Its a collection game with random reinforcement witch is like crack for our brains, like gambling addiction without losing one’s life savings.

Best of all since everyone is playing it its a fun talking point with friends and an ice breaker for people you meet on the street. Video games have gotten a bad reputation for keeping people indoors and away from sunlight and socialization. Pokemon GO is fun because it breaks this mold, encouraging outdoors and exercise. The locations in the game are all based around local landmarks and public art, and playing the game makes one actively search for them.

There are still major problems. The game’s unexpected popularity has been its own downfall. Its more than a week after launch in the United States and Niantic is still have problems keeping the servers up. These server failures and inability to scale are exacerbated by the application’s bugs. When the games receives a 500 response from the servers there is a chance that the game state can get stuck and it cannot retry the failed message or recover from the failure. This most often exhibits itself when a pokemon is in a pokeball but the player never gets the message if it was caught. 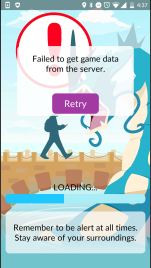 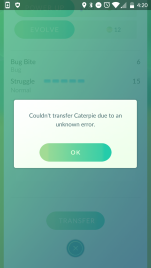 But bugs and server issues are temporary problems. Niantic has already pushed three patches since I’ve started playing an I’m sure they are scaling up there server fleet. The real problem with the game is that its not all there. The game play slows to a crawl around level 20 and to keep moving forward the player must move from Pokemon trainer to Pokemon hatcher.

The game can expand beyond the 151 Pokemon it currently has and as far as anyone can tell there is not level cap, but if there is nothing to do at higher levels most people are going to get bored. Those who don’t get bored will be so ridiculously high leveled that they will keep any new players out of the gyms. If Niantic want gym battles to be a big part of the game then they will have to figure out a way to address the growing power disparity between the long term players and the new and casual players.

My pride and joy

I see two things coming down the line that may improve the game play. First is trading of pokemon between players. This will allow people to fill out their pokedex must faster that the beginning and will make finding rare pokemon more special if you can give it away. This could also allow high level player to give extra pokemon to lower level players to quickly get them gym ready. The second thing this game needs is the ability to throw down with anyone anywhere. Instead of just battling in the gym for your team I want to be able to directly challenge my nearby friends to see who really is the pokemon master.